Being a Christian does not mean being inhuman. We have our hard times and our good times. Our happy moments and our pissed off moments. We do good things but sometimes we make mistakes. We are still human.

The world seems to think that Christians need to be perfect. If a Christian does something wrong, the world will point at them and say, "And he is supposed to be a Christian." It is sort of funny to me how so many atheists will say they don't believe in God because they don't see logic in believing something that isn't proven, but at the same time they seem to believe that a Christian should have been transformed into some kind of perfect being who never deals with reality. Like that's logical thinking!

When someone becomes a Christian, it means they have given their life to Jesus. Sometimes this can have a dramatic effect on a person. There are countless cases where someone was a truly bad person. Their life revolved around drugs and violence and they may have even killed multiple people in their life. After giving themselves to Jesus, they become kind hearted, caring people who will give their own lives up to save a stranger. Sometimes Jesus makes such a huge difference to someone's life that it almost seems like God has transformed that person into another being.  Often those really hard case characters have the greatest transformation because of the difference it makes in their life in comparison, but not everyone is like that.

There are many more people who are living decent lives already. People who are already upstanding citizens who are assets to their community, who give themselves to Jesus. Because there is not as drastic of a change in their lives, they don't seem to be quite as different.

More often than not, the amount of change in a person will depend on what level they have given themselves to Jesus.  Myself, I was always a good person at heart. I became a Christian and didn't truly give my entire life over to Jesus. I held back and I struggled with my walk with God because of it. Most people didn't know because they never saw me do bad things anyway. So I was a very weak Christian whose life was not drastically changed by God. It was not until I truly gave my whole life over to God that He made a real difference in me. But that doesn't mean I won't still go through hard times. hat doesn't mean I won't still falter now and then.

The more I read God's word, the less I desire the sinful ways of life. Maybe someday I will grow to a point with God that I will stop sinning. I can only pray for that kind of true dedication. Until then, I am still human. I make mistakes. I still sin. I sin far less than I used to, but I do still sin. Daily!  One real awesome difference Jesus has made in my life? Now when I ask God to forgive me for my sins, I know he does forgive me.

When I was young, it was common for Christians to believe that all you have to do is give yourself to Jesus and life will always be grand. That's simply not true. The closer we get to God, the more we open ourselves up to attack. Satan only cares about one thing in this world. Hurting God!  He doesn't care so much about Joe Schmoe who doesn't believe in God. That guy is already on the fast track to hell. Who does Satan worry about? Those who give themselves to Christ. The closer we get to God, the more Satan wants to pull us down. The more he will set us up to be tempted back into sin. Sounds pretty daunting huh?

Let me throw a wrench into the mix. Sometimes it isn't Satan that does things but God allowing bad things to happen to you. Why? Because sometimes God wants to test your commitment to Him. So now in turning to Jesus, you have not only placed a target on your back for Satan, but you have put yourself in a place to be tested by God. Sounds really, really daunting huh?

Its not that bad.

What you need to understand is that you can have a lot worse things happen to you without being dragged down by them when you have faith in Jesus. I have been going through a terrible two or three months. Hours cut, car problems to both cars, health problems, pet health problems, work problems on my job. It just feels like absolutely anything and everything I try to do, fails and all kinds of things are going wrong. A year ago this would have shredded my confidence in life. Today I am going through it and feeling good because I know two things. 1) God will reward me in his own time. Likely in heaven. 2) Because I know that for Satan to be hitting me so hard left and right, or for God to be testing me to this level, it means that I must be doing something right.  I won't lie to you. Its not always easy. I have my moments when I break down. I was struggling with some loss of hope last night when I went to bed and as I laid there I started asking God to help us.  To give me a little bit of my rewards I will get in heaven early and help us out financially some. Then like I often do, I started chuckling to myself as I had a thought for a decent meme. 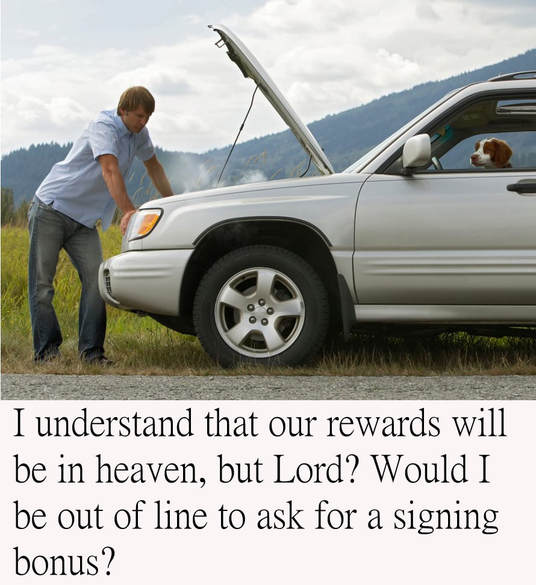 Christians are not perfect. We have our struggles and we have our times of strength. We have our flaws. What makes us a good Christian is that we pray to God regularly, we read his Word, and we strive to get stronger in Jesus and we give our lives to God. We are saved by our Faith and God's grace.  And the closer to God we get, the happier we are inside. No amount of testing will change that.

Return to One God Logic Articles