Matthew Stafford is Not Why the Lions are Losing! 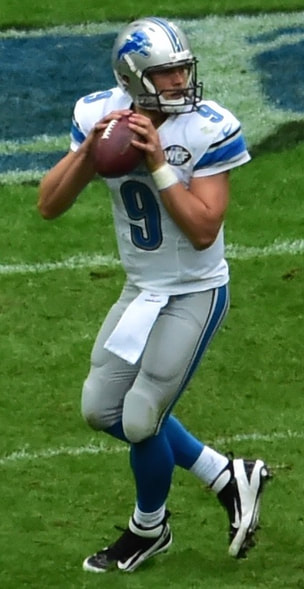 Believe it or not, the vast majority of Detroit Lions fans actually love having Matthew Stafford as their quarterback. Unfortunately it doesn't seem that way when you go on social media. Every Facebook group for the Lions seems to be plastered with posts or comments about how he sucks or how the Lions should draft a quarterback. I believe this is a case where the few make the majority look really stupid.
Look, I get it. I really do. In 11 years since Stafford has been drafted first overall, he hasn't won jack crap! Lions fans want to see a team that wins in the playoffs finally. I have been a fan for nearly 40 years now and I have seen exactly one playoff win. That was so long ago, most Lions fans have never seen one. Many of those who did see it have either passed away or jumped ship. Is it wrong to want to see a winner? Not one bit! It is in fact perfectly right to want to see a winner. The problem is you need to use your noggin and not your heart!
Picture someone is driving down the road and they hit a deep pothole, and it busts their rim. After the mechanic repairs it, they hit that same pothole again and bust the rim again. Then it happens a third time and a fourth and then a fifth time. Out of frustration of five busted rims, they grow impatient and decide to buy a new car. That will fix the problem they think! What do you think will happen in that new car? They are only going to bust a rim in the new car! The answer seems really obvious doesn't it? Stop hitting the same darn pothole! Replacing the car won't fix it! Replacing the transmission won't fix it. Either fill in the pothole, or start driving around it!  How hard is that to understand right?
You may think this is a stupid analogy. Nobody is that stupid right? Well obviously some of the Lions fans are!
The Lions keep losing games. Once in a while they make it to the playoffs but they always lose in the first round on those rare occasions. The running game has been a joke year after year. The defense can't ever seem to hold a lead. Only one faction of the Lions team is doing pretty good every single year. Some years it does great. That is the passing game. So the answer seems pretty darn obvious to me. Fix the defense or fix the running game. Those are the problems, so that's what you fix. Only there are a lot of fans who are frustrated and don't care about the defense or the run game. They want to replace the most important part of the car that is running good. The quarterback.
Does that really make any sense? Can you see that discussion?

Quinn:  "Hey Matt, come in and shut the door. Look, we are sick of losing here in Detroit. The fans deserve a winning team, so I am afraid we are going to have to trade you."

Stafford:  "Umm, I don't understand Bob. I know I got hurt last year, but it was my first games I have missed since 2010."

Quinn:  "No, its nothing to do with your injury. You are the toughest quarterback in the NFL."

Stafford:  "I was on pace for about 5,000 yards and almost 40 touchdowns. And that was through the toughest part of our schedule."

Quinn:  "No, no, it has nothing to do with your output last year. You were playing like an elite quarterback."

Quinn:  "Yes I know. You have played like an elite quarterback almost every season."

Quinn:  "We decided we are going to just draft a quarterback to take your place. Look, the truth is, you do everything we can ask a human to do. No other quarterback who has ever played the game would do any better than you have. Your only flaw is you don't win."

Stafford:  "This doesn't make sense to me. In my career, the Lions have placed a defense that ranked top10 in the NFL only once. Never once have I had a run game that ranked in the top 15 to keep defenses honest. Basically, the only reason you do win as much as we do is because I get my job done."

If a recording of this conversation got out, Bob Quinn would be the butt end of every joke in the NFL for years to come. People would completely forget about what Millen did before they forgot about this.
Logic is very simple. You fix the problems. You don't fix the part that is actually working good!

Unfortunately in the past, the Lions have had their moments of making these kind of stupid decisions.
With the most prolific offense in the NFL in the 1990's, they chose to scrap it completely because it scored too quick and the defense wasn't getting enough rest. They didn't tweak a great scheme, they scrapped it!
In Barry Sanders, they had the greatest running back to ever touch a football for 10 years and they chose to take him out of the game every time they got to the goal line. Why? Because they didn't want to get him hurt. Logic says it would be smart to leave him in with a larger running back and use the big guy to rush up the middle and Sanders to take a pitch out wide or go on a pass route. Keep the defenses guessing what was coming. They just took the most dangerous offensive player in the NFL out of the game when it mattered most.
They hire a first time offensive coordinator and spend a first round pick on a TE who had issues with dropping passes in college. And skipped the best Defensive Lineman in the NFL since then to do it.
In 2014 they had the 2nd best defense in the NFL. After that season they lost one of their good CBs  in Mathis, and the most dominating DT at the time in Suh. They never bothered t try and replacing those two players with quality talent. Never had a good defense again.
If the Lions were to move Stafford and draft a QB this year to replace him, that stupidity would be at the very top of the list. As hard as I have tried in this article, I simply cannot do justice for how stupid that would be to do.

I understand that Stafford has not won anything. I really do get that! But it is not his fault! He is the reason we are winning any games. With even just an average QB in his place, the Lions would likely not even have a season with 5 wins in the last decade. Even in 2014 when we had the 2nd best defense, our offense was so bad that Stafford had to break a record and win 8 games in come from behind fashion in the fourth quarter. The fans shouldn't be pushing to replace Stafford, they should be supporting him and turning on the front office for not fixing the defense!
Last year the Lions were 3-5 with Stafford under center. That's with a bad run game and arguably the worst defense in the NFL. All but one of his losses were games where the Lions held the lead in the 4th quarter and the defense couldn't hold it. Forget having a great defense, if the Lions defense was even average, they would have been 7-1 through the hardest part of their schedule!
The offense was one of the best in the NFL. They were outscoring all of their opponents until the defense caved in the 4th quarter.  Stafford was on pace for a top 10 season of all time in the NFL. But the defense was horrible and the run game was non-existent. And fans want to replace the part that is getting it done?
If the Lions don't take two pass rushers in their first three picks of the draft, they are stupid. If they move Stafford or even look to draft his future replacement in the first three rounds, they are living up to their reputation as a bad franchise. It really isn't rocket science to turn this team into a winner.
What scares me is that the few stupid fans who actually want to replace the best player on the team, are by far the loudest in social media, and the front office will listen to them.


More Articles by OneGodLogic that are not about God.
Other Passions